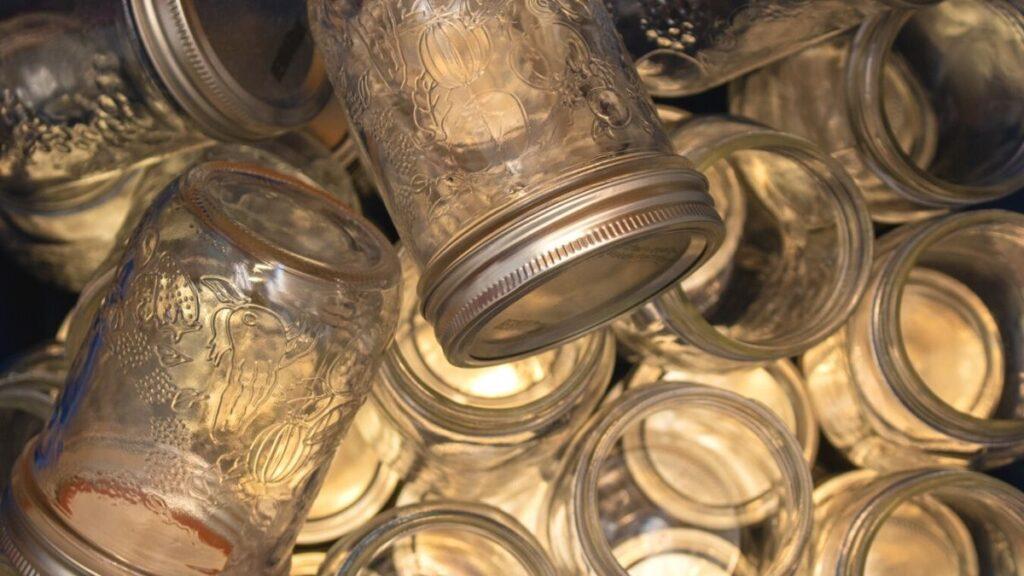 No matter the hobby, the most frustrating side effect is always the lack of storage space for all of the materials. This is especially true with canning, as it isn’t usually done year-round, and if you’re a prolific canner then might have hundreds or even thousands of jars to find a place for.

In this article, I’m going to give you some ideas on how to store empty canning jars that should make your lack of storage space and chipped jars a hazy memory.

In a hurry? Here’s the quick guide:

To store canning jars in a way that keeps them from chipping and excess dust, place the jars face-down with canning ring on into a cardboard box. Separate the rows with extra pieces of cardboard so they don’t clink together, and cover the layer of jars with plastic wrap.

You have many options for storing your jars, but, depending on your tastes, cardboard might not be your best option. Not only is it difficult to find industrial-strength cardboard boxes capable of supporting the jars, but they also look downright ugly!

Not to mention, open cardboard boxes in garages or storage sheds can be an open invitation to spiders. So, while this is the easiest solution to keep your jars safe from breakage, there may be better options for your tastes listed in this article.

To store jars in a cardboard box that isn’t the manufacturer’s, place the jars top-down with rings attached into the box. Place squares of cardboard between each jar to keep them from clinking together. Place a sheet of plastic over the top to keep out dust.

Also Read:  Do Jars Have To Be Fully Submerged When Canning?

If you’re lucky, each of your jars has a corresponding space in the mason jar box they came in, but oftentimes, those boxes get recycled and your jars are left to flat around the garage, collecting dust and getting jostled.

If you don’t have this box anymore, you can use any cardboard box, but it’s better for it to be pretty thick and sturdy. The idea behind putting the jars into the box with the canning rings on them is that the rims are less likely to get cracks that could put them in danger of breaking during canning.

Put the jars into the box with the canning lids on them, upsidedown. Then, separate each jar with an additional piece of cardboard so they don’t clink together. By putting a layer of plastic wrap over the top, you can keep out some of the dust.

You can stack these boxes, but it’s not recommended to stack them more than two tall.

Using a 12, 28, and 32-quart Sterilite storage bin, you can store empty canning jars in a way that protects them from dust and that makes them easily stackable. For extra dust protection, you can use clear plastic trashbags to wrap around the jars.

Storing your empty jars in plastic bins isn’t the first option, because buying proper storage bins can add up, especially when you have a lot of jars to store. The idea behind this storage method, however, is that you can purchase bins for the height of the jar. If they’re properly fitted, it will keep the jars from clinking too much, and it will make your storage space more efficient.

Sterilite does actually make bins that have a seal on them, which would make the plastic wrapping over the jars obsolete. If you can shell out the extra money, these are a great long-term storage solution.

Also Read:  How To Use Canning Jars With Rubber Seals (5 Tips!)

Some recommend putting a piece of cardboard on the bottom of the bins and putting the jars in mouth-down. This will add an extra layer of protection against chipping.

To make the most efficient use of your space storing canning jars in the cabinet, use a stackable dish rack or can dispenser to store jars horizontally without stacking them directly on top of each other.

If you don’t have a huge collection or you have a lot of cabinet space, it may be ideal to store your empty jars in the cabinet. However, you should be hesitant to stack them directly on top of each other to avoid chipping.

Found in grocery and dollar stores, stackable racks generally have fold-out feet that can connect to other racks, making it easy to customize your shelving space.

With these, you can have several layers of jars lying down or standing up, depending on the size, so the jars aren’t touching each other, but you’re making the most use of the vertical space in your cabinet.

One problem with this method is that your cabinets are pretty high-traffic areas, meaning they may clink together every time you get another dish out or open the door.

To avoid having them clink together if they’re lying next to each other, you can add some extra protection with cardboard dividers, newspaper, or washcloths.

One way to add shelving space and store your empty jars safely is to use a standing rack. Placing them mouth-down on a piece of cardboard laid on the bottom of the rack, you can set jars out of the way, but they are easy to access in a pinch.

Another investment, sure, but these racks can be a relatively cheap way to store your jars in bulk if you don’t have shelving space and may access them regularly, as opposed to once a year during canning season.

Standing racks generally have rimmed wire baskets that are stacked several feet apart. Because of the rims on the baskets, the jars would be safe from falling out, and the wheels on the bottom allow you to reposition the rack as needed.

Usually, the wires on the basket shelves are cushioned with paint, meaning you could hypothetically lay the jar mouth-down and they would be cushioned, but it wouldn’t hurt to lay cardboard down on the bottom.

With this method, the jars should be plenty secure, but they won’t be safe from dust. If it’s really going to bother you washing all of the dust off when canning season comes around again, you can lay plastic or towels over the top.

Canning experts come up with brilliant ways to store your bits and bobs that create less hassle for you when it comes time to dig them out again. These tips might make your life a little easier.

As you put your jars away for next year, I hope these ideas on how to organize empty mason jars have given you some fresh inspiration for protecting your jars and utilizing your storage space in the most efficient way possible. 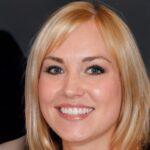